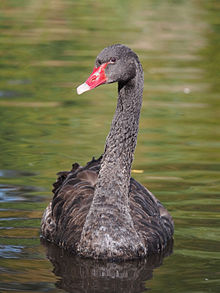 While researching our webpage on Black Swans we came across an interesting fact.

Up to one thirds of all black swans are homosexual and nearly a quarter of all black swan couples are same-sex couples.  Usually it is two males getting together. These males sometimes steal a nest from a heterosexual couple and raise the young as their own or one male copulates with a female and once she has laid her eggs they chase her away and raise the chicks themselves.

Scientists believe there is a biological advantage in this behaviour as it appear that there is a higher survival rate amongst cygnets (chicks) raised by male-male couples than by male-female pairs. This may be due to the fact that there is an additional male to protect them and that having chosen to be parents they are more caring than natural heterosexual pairs.

Note: Homosexual behaviour amongst animals has been observed in over 1500 species. Besides black swans, these include the giraffes, vultures, bears, dolphins, etc.

You can learn more about these interesting birds at Black Swans

Posted by TrishansOz at 4:21 PM No comments: